Conventional Wisdom recommends iron supplementation for all infants older than 6 months. The most common form of supplementation is rice cereal — that’s right, refined, usually not organic, rice cereal, a food that has so little nutrition within it it is basically a carrier for minerals added later on. In addition, the iron in rice cereal is poorly absorbed. The label might say “Iron: 11 mg” but your baby is only getting a tiny fraction of that. 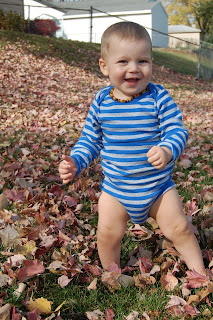 How did humans manage without rice cereal? Were their kids anemic, dizzy, with a lowered IQ? Of course not. It is time to understand that nature does not make mistakes as flagrant as this. Yes, humans need iron. But, they can – and should – get it from food.

I decided to avoid giving Franklin iron supplements and/or rice cereal for his own benefit. I wanted to give him nourishment in the form of whole food, nutritious, delicious food, rather than pills and drops (except for vitamin D as supplementation is usually necessary due to our lack of exposure to sufficient sunlight). At his one year check-up, I had his HGB levels tested, and… he is fine. My little boy, who arguably has high iron needs due to constantly being in the 95th percentile for height and weight has gone an entire year without supplementation and is far from anemic. Of course, I tried to make sure he was getting enough iron through his food — I did not assume he’d be fine regardless of what he ate.

Here is what I did:

I breastfed on demand, not according to an arbitrary schedule.I think it’s crazy to expect all infants to eat according to a schedule. Some kids, like Franklin, are destined to be tall and grow faster than average (his clothes were for 24 months old toddlers before he turned 1!). As a result, they will need more food than average, and that’s fine. 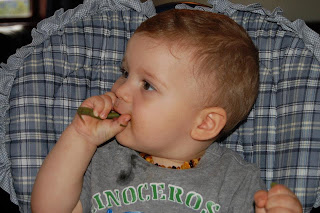 But more importantly, frequent feedings will increase the amount of iron they get through breastmilk. It is thought that iron levels plummet in breast milk after the first 6 months — I believe it, as other mammals don’t have iron rich milk either. But let’s say one baby is breastfed on a schedule every 3 hours, and another breastfeeds on demand every hour. The 2nd baby will be ingesting at least twice as much iron, and since the body can store iron, more iron will be kept in reserves.

I would strongly discourage mothers from putting their child on a schedule. Infants grow so quickly, and their needs have to be met. If they don’t get the nourishment they need, their health and growth will suffer. It’s as simple as that.

I made sure to eat iron rich foods myself for a more nutritious breast milk. Breast is best as long as you are getting enough nutrition yourself, but as I’ve said many times, breastmilk can be made even better. I ate iron rich foods, and in sufficient quantities. I made sure I got enough greens, hemp seeds, pumpkin seeds, and more. I drank quarts and quarts of fresh nettle infusions.

I gave Franklin iron rich foods. As soon as Franklin started eating solids, I gave him green juices. He loved them. While the CSA was going, I would often buy a pound of fresh Italian parsley every week, and would juice part of it and make tabbouleh with the rest. Franklin would then eat little bits of tabbouleh. 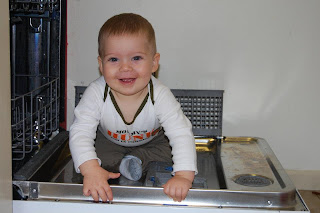 I also used nettle infusions instead of water in many of his smoothies, or I would spoon feed him nettle infusions straight. I fed him green smoothies almost daily. I added finely chopped parsley to his purees.

I fed him iron rich berries, often in conjunction with chard. Or, I would put blueberries in a mesh teether along with pieces of fresh oranges, as vitamin C enhances iron absorption. I mixed hemp seeds in many of his smoothies. I often made lentil soups (from both French lentils and red lentils) and would puree them for him.

I gave him high quality animal products, such as pastured egg yolks.

I know that many like to practice Child Led Weaning where spoons are not used and children feed themselves from the very beginning, but it did not really resonate with me. A lot of animals feed their children, and I did too. I definitely think that Child Led Weaning can work for many people, but I used a spoon many time and I don’t think he would have eaten as much had I not used one at all.

I gave Franklin iron rich superfoods. On top of the foods above, I would often add chlorella to his food. Chlorella is very rich in iron, and it is thought to be a superior source of nutrition for children. Some Japanese study apparently found that children fed chlorella had near perfect maxillary-facial development, and no cavities. I’m doing a lot of research to try and make sure Franklin has a beautifully developed jaw and no crowding of the teeth. We’ll see what happens!

Please note that iron deficiency is not trivial. I strongly recommend getting your children tested to ensure they are getting enough iron, as symptoms of deficiency are not always evident. If Franklin had been deficient, I would have given him a little ionic iron and paid more attention to his diet.

Have you tested your child’s iron levels? What are your favorite iron rich foods?